Farewell to a legend

After 47 years of diligent service Bruce McKenzie left Kovacs in 2019. We look back at his career as he looks forward to a well-deserved retirement of hunting and fishing.

The world was a different place when Bruce McKenzie first walked through the doors at Kovacs.

In 1972 Watergate has just begun to unravel a presidency in the United States. Dwayne ‘The Rock’ Johnson was born. Closer to home the arrival of Play School brought Big Ted and the gang to our screens.

So much has changed over the years. Yet Bruce’s unerring accuracy and commitment to quality furniture remained steadfast. Ask around at Kovacs and you’ll soon hear how he led by example in unwavering effort and old-fashioned skill.

“His experience was hugely valuable, as was his dedication to the work,” says Hildy Kovacs. “You could depend on Bruce to get it done and get it done right. There was no cutting corners and no ‘good enough’ results in his work.”

Bruce started in 1972 when Stephen Kovacs ran the company, initially working on cabinet making for the Cameo Collection. Following the company’s move across three different locations to the spot on Ferry Road he would make the move into frame making with the shift into soft furniture.

He’s always been a steadying influence behind the scenes. However in recent times this presence was required centre-stage for Kovacs. Our ‘made right here’ campaign sought to place a greater emphasis on the people behind the brand. Motivating Bruce to step into the spotlight was no easy task. 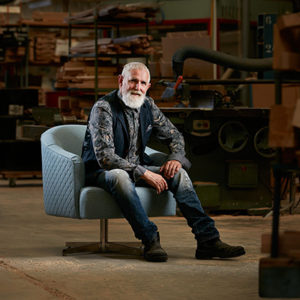 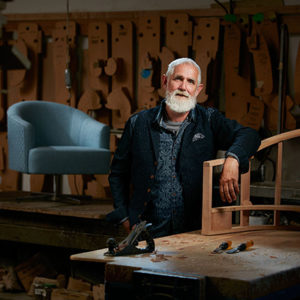 “I didn’t want to at first,” he says. “Hildy talked me around though – and it wasn’t too stressful in the end.”

Any nerves would prove to be unwarranted. The photos were perfect and the Kovacs team were proud to have Bruce representing the company on the billboard. Inquisitive locals sometimes asked us where we sourced the male model!

While the big screen fame was undoubtedly earned, first and foremost his talents were best put to use at the equipment on the factory floor. Over the decades Bruce adapted his craft, learning new techniques and moving forward without compromising the artisan care within the craft.